As a wrangler, I do often get pee’d, pooped and puked on . . . The Preposterous Triple P’s, I call them!!   But the wonderfulness FAR outweighs the not so wonderful.

AND . . . . I get to meet, work with, hang out with and interact with SOME OF THE MOST AMAZING STARS!!

We’re in the middle of shooting a scene for WHAT TO EXPECT WHEN YOU’RE EXPECTING . . . we’re in the home stretch of the three months of shooting, and this particular scene is one of the last ones of the “BIRTH” sequence, where all of our leads are giving birth to their beautiful babies.  (I had 50 BABIES and toddlers on this shoot, Ladies and Gents  . . . . yep   FIVE OH – FIFTY!!  More on that in another episode of Will Work For O’s!)  And by the way, you CAN’T find better books on parenting than those written by the fabulous HEIDI MURKOFF.  How terrific to meet and work with her . . . I’ll tell you DELIGHTFUL stories of her in the upcoming months.

However, in the meantime, here are a few quick pics of a few of those amazing fifty babies – if you’ve seen the movie, you’ll recognize them . . . these are  mainly some of the The Dude Group babies and a few our “newborns”. . . 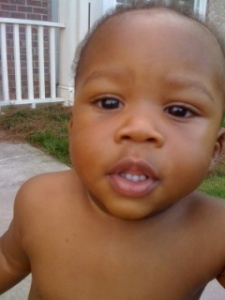 But back to Dennis:   In the film, he and his wife (played by the delightful Brooklyn Decker) are the PERFECT couple . . .everything is way easy for them . . . the joke at this point is that their twin babies are the ones crying and screaming in their parents’ arms, while the other parents are blissfully holding their new angels.

Our director, the fabulous Kirk Jones,  asked me what I could do to make the babies cry – but of course, without being abusive.   OF COURSE – DUH!!!!!!  I told him a few things that we could do, none of which are harmful in anyway . . . and one of which, of course, is to make a sudden noise in an other-wise quiet room.   A baby is momentarily startled, cries  . . .we get the shot IMMEDIATELY and within a few second, I’ve taken the baby into my arms and have calmed and made him/her happy again.  No harm – no foul  and win/win.

Dennis and Brooklyn are on their marks ready to pace back and forth, I bring each of them a twin and then run to hide all smooshed into a corner of the small hospital room in which we’re filming.  Our 1st AD says “rolling”, our director says “action” – I make a ridiculously loud clapping noise  and  . . . . . . .

Not a peep outta the babies!   They are happily cuddling in their “parents’ ” arms.   They obviously are used to noise (which is a good thing for a real babies – less stress in their  lives!!), but it’s not helping us get the shot with our “reel” babies.

There is general hilarious laughter from cast and crew . . . and we try again.  SEVERAL times…. and each time?  Only happy, and now SLEEPING babies, for heaven’s sake!!!  Blissfully happy and fast asleep.  OY!

Kirk says – “not to worry, we’ll add the crying in post, and we’ll shoot this particular set up so we’re really on Dennis and Brooklyn, and won’t see the babies’ faces – so no one will know they’re not crying in the final edit.”    FIrst AD Lisa Satriano – ( who is FANTASTIC – and I’d work with her in a minute ANYwhere ANYtime) says, “So we can shoot without the startle noise this time”. 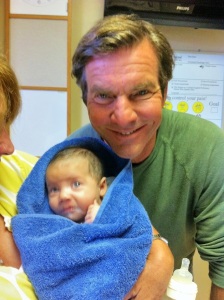 I go back to my hiding place after once again getting the babies to our two stars, Kirk has a quick word about something or other with Dennis and Brooklyn, and goes back to the video monitor in the room just across the hall.  We’re all ready . . . but just before we get to rolling, Dennis turns to me:

“Dawn, honey, can you do that clapping thing again?”

So, of COURSE, I say yes cuz  A) a major motion picture star  has requested it, and B) I now assume that Kirk has decided to include the babies’ faces in the shot, and that’s what he just told Dennis and Brooklyn.

1st AD yells from across the hall, “I SAID WE DIDN’T NEED THE CLAPPING NOISE IN THIS SHOT”.

I UNfreeze FAST and find my voice:

He turns and looks at me.  Looks at me with that damned  Dennis-Quaid-crooked-amazing-charming-irresistible smile that has been making women swoon ever since his first film, and he says

Will Work For O’s